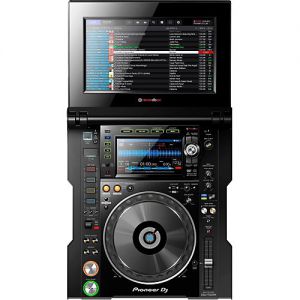 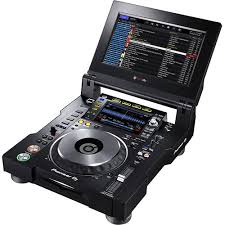 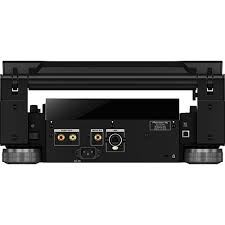 Earlier this year at NAMM 2016, we saw the first public prototype of Pioneer DJ’s new festival-ready professional DJ system – what they’re calling the TOUR1 line. Today, Pioneer is officially making it clear that these aren’t just prototypes: meet the CDJ-TOUR1 and DJM-TOUR1, set to hit the market in August. Keep reading for details.

The TOUR1 lineup will be available starting in August 2016
CDJ-TOUR1 will cost $4,999; DJM-TOUR1 will cost $5,999
The units feature advanced sound quality ES9018 32-bit D/A converters that “deliver incredibly low noise and distortion” at 96kHz/24-bit output
Each unit has a fold-out screen in addition the normal displays
The screens are powered by built-in CPUs – and they can show a variety of waveform and browsing views, which seem to suggest a ton of new display options for future

The layouts are very similar to the CDJ-2000NXS2 / DJM-900NXS2
The build quality and input/output ports on these units are significantly more robust – suggesting that these will be used exclusively by big festivals like EDC, Ultra, etc.

The CDJ-TOUR1 features an ES9018 32-bit D/A converter, made by ESS Technology, to deliver incredibly low noise and distortion even at the super-high volumes needed for large-scale events. It can reproduce 96 kHz/24-bit high resolution sound and send it to the DJM-TOUR1 or DJM-900NXS2 through the SPD I/F digital out. FLAC and ALAC formats are supported and the power supply is separated from the main circuit board to further reduce unwanted noise.
2. 13-inch fold-out touch screen for enhanced browsing and control

Use either the standard built-in 7-inch or the fold-out 13-inch LCD full-color touch screen. The larger screen shows more information to help you browse and select tracks faster. Plus, with its own built-in CPU, the screen offers the potential for other features in the future. Both screens feature the same information as the CDJ-2000NXS2, including:

Track Filter mode: use the touch screen to filter tracks by rekordbox information such as BPM, key or My Tags.
Keyword search: bring up the Qwerty keyboard to search for tracks by name.
Multi-colored Wave Zoom and Multi-wave view: see detailed waveforms or opt to see waveforms from up to four CDJs at the same time.
3. Lockable LAN port for secure connection

The CDJ-TOUR1’s LAN port has a NEUTRIK etherCON® connector featuring a latch lock, so compatible cables will stay in place no matter what vibrations or knocks are thrown at them.

Adjust the isolator feet to ensure a stable set-up on any surface and tilt the 13-inch screen to suit your preference or the lighting. Attach the display shade to protect from the sun’s glare when you’re playing outside.
5. Familiar layout and features inherited from the CDJ-2000NXS2

The CDJ-TOUR1 has the same layout and performance features as the CDJ-2000NXS2 to help you feel at home. Prepare your tracks in rekordbox as usual, adding Hot Cues, loops, tags, etc. – then load them to the CDJ-TOUR1 and trigger features including Beat Sync, Slip Mode and Hot Cue Auto Load.

Pro DJ Link lets you share one source across up to four players and unlocks a host of information and features such as Beat Sync and Beat Countdown.

The DJM-TOUR1 is the world’s first DJ mixer to have an AES/EBU digital output, meaning you can connect directly to front of house, even over long distances, with no loss of sound quality.

It’s also the first DJ mixer to include a high-res word clock input, ensuring a high grade digital audio signal to front of house for precise synchronization and the best possible sound quality. And the power supply has its own dedicated circuit to further reduce unwanted noise, while power factor correction (PFC) reduces distortion across the frequencies.

Like the CDJ-TOUR1, the mixer features an ES9018 32-bit D/A converter for low distortion and a dynamic range of up to 129 dB. It also shares high quality sound components with its NXS2 counterpart, including a 96 kHz/24-bit sound card with a direct digital connection via SPD I/F port and USB port, 64-bit floating point mixing processing, enhanced dithering technology and a low-jitter clock – which combine to deliver an accurate, natural sound.

Browse playlists and use the touch screen to select tracks for up to four CDJs connected via Pro DJ Link. You can also choose between horizontal or vertical multi-wave view – and the vertical view includes an RMS meter to help you monitor and control the volume for each channel.
3. Lockable LAN port for secure connection and 5-port LAN hub

The DJM-TOUR1’s LAN port has a NEUTRIK etherCON® XLR connector featuring a latch lock to keep compatible cables secure. Plus, a five-port LAN hub means you can connect up to five players or laptops to the mixer.

Two independent headphone sections mean you and another DJ can cue tracks at the same time without hearing each other’s input. Each headphone input has its own volume control.

The Aux input is an XLR/TRS combination port, giving you the flexibility to connect your choice of external devices including drum machines, effectors, synths and samplers.
6. Tilting screen and display shade adjust for any environment

Tilt the 13-inch screen to suit your preference or the lighting and attach the display shade to protect from the sun’s glare when you’re playing outside.

The DJM-TOUR1 will feel instantly familiar as it shares its layout and robustness with other pro-DJ mixers including the DJM-900NXS2. Like its NXS2 counterpart, it features improved channel fader/EQ curves, high quality Sound Color FX, quantized Beat FX and an Independent Send/Return.

The DJM-TOUR1 is our first mixer to have a KUVO Gateway on board so you can easily connect to KUVO: our social platform that lets you broadcast information about what tracks you’re playing, in real time, to fans around the world.