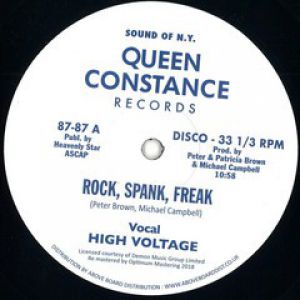 
Harlem's legendary Disco label Queen Constance has long been a cult favourite among fans of underground dance music for decades.

One of many labels operating under the equally legendary P&P family of imprints Queen Constance was operated by one Peter Brown, a truly colossal figure in NYC's music scene, its catalogue still fascinates music lovers to this day. Covering a wide range of styles including Gospel, early Rap and Disco the label's output continually finds it way into the playlists of respected DJ's and selectors across the globe. This latest repress from the vaults is a real biggie - a true NYC underground disco CLASSIC!

High Voltage is one of the more familiar names in the P&P / Queen Constance galaxy. Led by Peter Brown and Patrick Adams right hand man and producer Michael Campbell who presided over some of the biggest and best sides the labels put out. This one is a must, essential, do not sleep business. 11.00 minutes of Disco fury! One is forgiven in thinking that this would've been huge had it have come out on one of the 'bigger' Disco labels, but that hasn't stopped 'Rock, spank, freak' becoming a true blue club anthem. Appearing in the playlists of DJ's and selectors as diverse as Larry Levan, Danny Krivit and Daniele Baldelli. Rough n'ready, unpolished but musically explosive the sounds contained on this here 12" are indeed High Voltage! As with a lot of these jams, this one's been badly bootlegged, so ignore those wack counterfeits that are out there and bag you a fully licensed reissue of this absolute bomb. Dope.

This is a 100% legit reissue, made in conjunction with Above Board distribution and the Demon Music group, lovingly remastered with love by Optimum Mastering, Bristol UK.