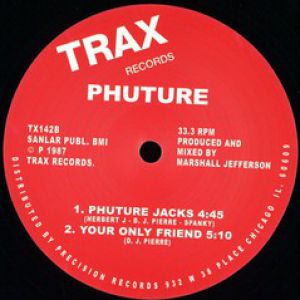 TRACKLIST:
A1: Acid Tracks
B1: Phuture Jacks
B2: Your Only Friend


Phuture only released a handful of tracks (plus an album a full decade after their debut), but have remained a legendary act in the development of Chicago house for their stomping 1987 single "Acid Trax", the track that began and defined the acid house sound. The group was formed by DJ Pierre, synthesizer fan Spanky and Herb J in 1985 as a recording entity to produce records for Pierre to mix into his sets at several crucial Chicago clubs. After being turned on to the high-pitched squelch of the Roland TB-303 synthesizer (marketed as a bassline machine for solo guitarists), the trio emerged from the studio with a track they called "In Your Mind". Ron Hardy previewed the track at his legendary club the Music Box - where it became known as "Ron Hardy's Acid Track" - and Phuture re-made the cut with production by Marshall Jefferson. Released on Trax Records in 1987, the single created a dividing point between the Chicago sound before and after it, with hundreds of "Acid Trax" imitations flooding the local market. After it caught on in Britain as well, the single soundtracked the wave of club madness which coalesced in the rave movement by the end of the decade.

Re mastered for 2014 and re released in original 1987 artwork. Released in conjunction with Trax / Harmless.