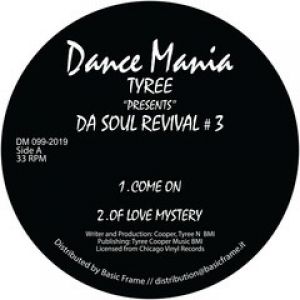 
Official 2019 Reissue of this masterpiece from the Dance Mania catalogue. Da Soul Revival #3 is a four tracker Ep produced by Tyree between 1994 and 1995. "Come On" draw inspiration from the sounds of the Hyde Park Racketball / Tennis Club, South Shore Country Club, Bismark Pavillon. It's something interesting and enough to slice and dice and the rest is history. As for "Of Love Mystery", has been created a playful instrumental to have as Dj that would drive the dance floor into a frenzy because of the energy of the track, and that's why has been given that title. Now for "Nuthin Wrong", this track was originally a Hip House Record that was recorded at friends house named John Kadaris along with another Tyree good friend, Curtis Harmon who's Lil Louis younger brother, that sang the hook. The last track on the Ep "I Need A Joint" was actually recorded at Jammin Gerald's House, on his enclosed front porch where his equipment was.