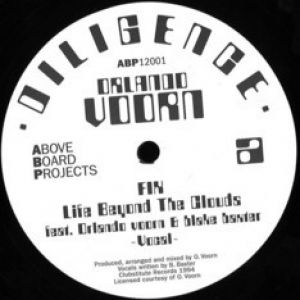 TRACKLIST:
A1: Life Beyond The Clouds (Vocal) Feat. Orlando Voorn & Blake Baxter
B1: Dx Me Silly


Dutch Techno master Orlando Voorn has opened up his archive for the first of what will be an ongoing artist focused series brought to you by Above Board Projects. The compilation will be spread across 2 double 12" volumes and will feature tracks from many of Voorn's pseudonyms including; Fix, Baruka, The Ghetto Brothers, Mute & many more. With this initial release we are proud to introduce the lead-in sampler 12" for Voorn's forthcoming 2-part archival collection entitled 'Diligence'. Each track has been carefully selected and programmed in conjunction with Orlando Voorn and this 12" even features the unreleased and previously unheard gothic 1992 techno masterpiece 'DX Me Silly' which was very kindly excavated from the DAT archive specifically for this project. The 12" also features the classic sounds of Fix's 'Life Beyond The Clouds' featuring Detroit legend Blake Baxter. Orlando Voorn's association with Detroit has been long running since day one and some of the music contained within this compilation celebrates that while showcasing some of the more overlooked tracks from the man's more than extensive catalogue. In short, this is a must have for any serious Techno fan! All tracks fully licensed and remastered with the full permission of Orlando Voorn. Remastering and lacquers by Curvepusher. Compiled and directed by the Above Board Projects team. Design and layout by atelier Superplus. 2019