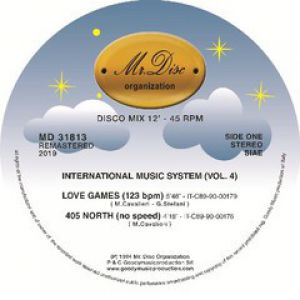 Pressed on transparent yellow-vinyl lmited to 300 hand-numbered copies, It’s another essential vinyl for collectors with four killer tracks extracted from the International Music System second LP dated back to 1984 and all remastered for 2019.

On the A-side, the sophisticated “Love Games”, that will be included in the official soundtrack of the fifth season of the so popular Netflix series "Narcos", plus the slow ballad "405 North".

On the B-side , "Vanity Rap" which brings Rebecca McLain vocals to the fore while and "Freeze Rock".

Often abbreviated as I.M.S. the project was created in Vicenza, Italy in 1983 by Maurizio Cavalieri and Giorgio Stefani, the same musicians who brought you “Spacer Woman” by Charlie. Under this moniker, the two would release two albums of stylized and syncopated electronic dance songs showcasing the still-evolving advancement of computer and keyboard-generated music.