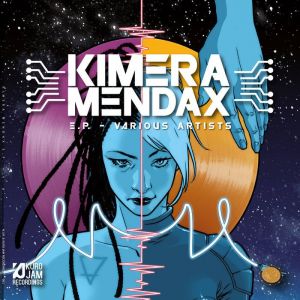 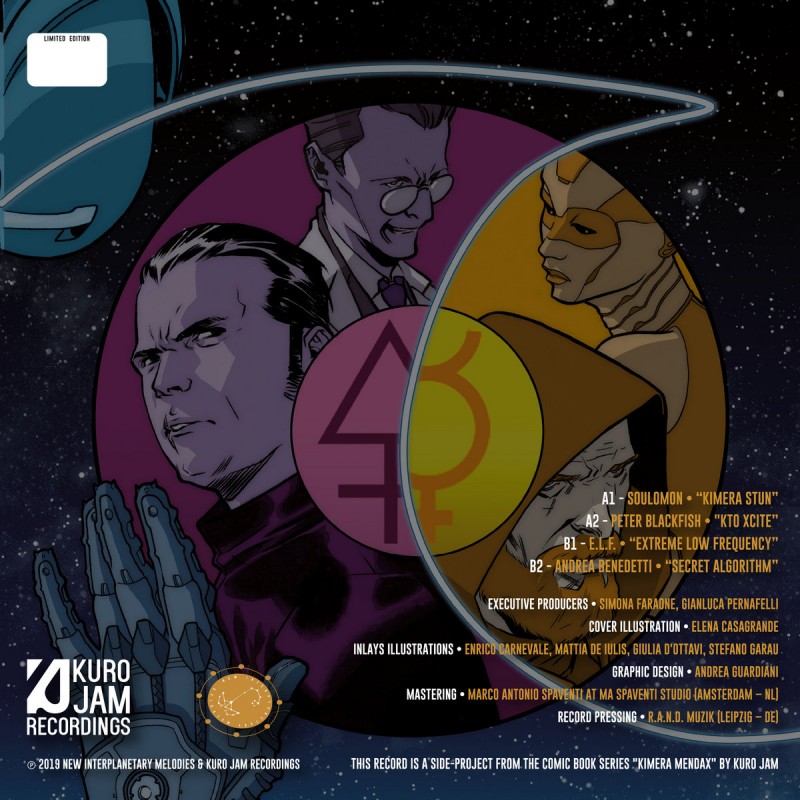 This record is a side project from the comic book series KIMERA MENDAX by Kuro Jam.


New Interplanetary Melodies, the label run by Simona Faraone, and the Roman collective Kuro Jam have joined forces to create Kimera Mendax EP. This ultra limited edition vinyl (150 hand-numbered copies) marks the ?rst of a series of disco-graphic collaborations between the two realities (NIM / Kuro Jam Recordings). The record accompanies the release of the second volume of the homonymous cyberpunk comics saga and represents its original soundtrack. Kimera Mendax is the title of the debut graphic novel (2017) of the artistic team Kuro Jam composed by the artists Enrico Carnevale, Mattia De Iulis, Giulia D’Ottavi, Stefano Garau and the screenwriter Gianluca Pernafelli. The comic tells the story of a group of rebels who, from the basement of an esoteric Rome of the future (2048), struggles to neutralize the KX bio-operating system, a sort of total and totalizing social network, to which humanity connects through robotic appendages. Vinyl records are the instrument of struggle for the “disconnected“: the guys try to use music to awaken the natural human vibrations, atrophied by the massive use of technology. Between the pages of the two volumes are hidden tributes and quotes to Gurdjie?, Aphex Twin, Giordano Bruno, but also to the underground rave culture of the early 90s, with a particular reference to the London scene. The EP, composed of 4 tracks with Techno / Electro / Ambient sounds, sees the participation of 4 di?erent producers who have perfectly adapted their sounds to the sci-? suggestions inspired by the novel : the opening of this sound adventure is entrusted to Mayo Soulmon and his Kimera Stun (A1), an elegant and cosmic glitchy house; follows the deep and exotic electro of KTO Xcite (A2) produced by Peter Black?sh. The ?rst part of side B is entrusted to E.L.F. Exterme Low Frequency (B1), a track with an incredible progression, a real poison for the dance ?oor; the ending is pure sci-? ambient of the legend of the Roman Techno scene Andrea Benedetti : Secret Algorithm (B2) bears his signature . Each vinyl will be accompanied by 4 exclusive inlays illustrated by the 4 Kuro Jam artists. The DJ Xtal, the visionary witch Falena, the robot that advertises the KX bio-operating system and Talamo, the old junk dealer, keeper of strange objects from the past, come out from the comics boards to wear a new graphic look here. The record is a colorful artistic collector's item made precious by the cover created by the talented designer Elena Casagrande