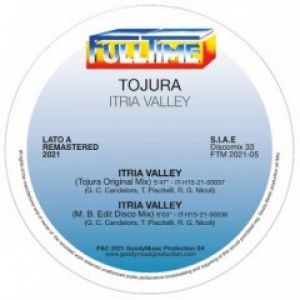 After putting out re-edits of two never released before tracks by the
seminal italo band Rainbow Team, Tojura are back on Full Time Production with a fine brand new EP, ready for the years of the raving fans of the label.

“Itria Valley“ (in homage to the Apulia one) is such an irresistible
modern disco number which receives a smooth treatment by M.B. Edit in addition to the Funk rework by Hector Romero & Ayala, followed by a Latin Afro Dub version delivered by Les Inferno that's perfect for
getting weird on the dancefloor during the later hours of the evening.
These are 4 glorious tunes for grown-ups dancefloors.