Sei in: Vinile \ Techno (all) \ Experimental/Electronic 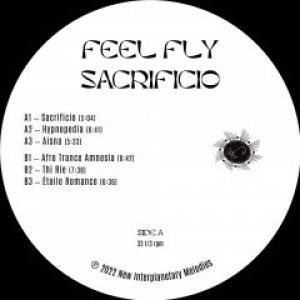 TRACKLIST:
A1: Sacrificio
A2: Hypnopedia
A3: Aisna
B1: Afro Trance Amnesia
B2: Thi Rie
B3: Etoile Romance

Born in 1989, Daniele Tomassini aka Feel Fly, dj, producer, sound composer (he recently completed the soundtrack for the movie I
Santi by Giacomo Abbruzzese, awarded at the prestigious CineMed festival in Montpellier), co-founder of the Afro Templum party, already
known for his previous works for labels such as Prins Thomas’ Norwegian Internasjonal or the Ibizenca International Feel, lands on
Simona Faraone’s label, New Interplanetary Melodies, with his first EP, after having made his debut on the same label as remixer on
the EP signed by Leo Young (NIM005).
The entire EP is inspired by the ancient and mysterious Etruscan culture, whose peoples inhabited the historical-geographical region of
central Italy: all the tracks that compose it were in fact conceived under the cloister of MANU (National Archaeological Museum of Umbria)
in Perugia.
The title track, Sacrificio (A1) opens the album with an ecstatic drum-break on which powerful subs stand out, catapulting you directly
into the obscure rituals of the haruspices, intent on interpreting the signs of the divine, with the help of mysterious pads and shimmering
synths like fires in the night.
Side A continues with Hypnopedia (A2), House music characterised by pressing rhythms and sharp rides that transport us into a dreamy
dimension, a nostalgic, evocative dream of worlds that now belong only to the sphere of memory. While in Aisna (A3), which closes the
first side, the atmosphere changes decidedly towards progressive house, a sound that has become topical again in recent years, after
having raged in the second half of the 90s in those lands that were once called Etruria. And just as the Aisna was an early morning ritual
held in a field or a sacred wood, this track has all the makings of a rave at the crack of dawn.
The B side starts on the same wavelength with which the first side closed, Afro Trance Amnesia (B1), in fact it maintains that feeling
with the most sweaty dancefloors thanks to its epic breaks and vaguely Trancey arrangements that rest on dragging and obsessive
percussions able to smash any kind of dancefloor. With Thi Rie (B2) the groove becomes decidedly more disco thanks to a rolling bass
line interspersed with powerful toms and full of suspense thanks to the skilful use of enigmatic pads.
Étoile Romance (B3) is the title of the beautiful piece of Ambient that closes this first EP by Feel Fly on NIM, 6 minutes and more of
dreamy arpeggios that fit perfectly into the groove of that Italian tradition of soundtracks and library music that has produced so many
masterpieces.